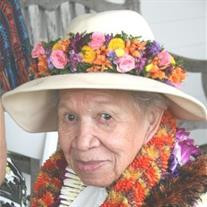 ABIGAIL DUARTE NALUA`I Abigail “Abby” was born in Honolulu May 25, 1914. She entered Heaven’s gates on October 30, 2015. A consummate mother and homemaker, Abby enjoyed preparing meals for their family of eight. That number increased by many during WWII, when military men were often invited home for a hot meal and companionship. Abbie had an unwavering faith in God. She was a member of Central Seventh-Day Adventist Church for many years and up to her death a faithful member of Kaneohe Adventist Church. She was also very interested in the church’s music programs. Her husband, Raphael K. Naluai was a member of The King’s Crusaders, a church male quartet, for many years as well as serving as Director of Music with the Central Church. Abby and Raphael’s musical talents were inherited by their children, all musical in their own rights. The two eldest sons, Clayton and Alan formed their own musical group, The Surfers, a group popular across the country in the 60’s and 70’s. Producing many recordings during the span of their careers. Abby was predeceased by her loving husband of 58 years and one son, Alan. Abby is survived by her children Clayton (Margaret), Judee (James) Mulcahy, Richard "Buddy", Michael, Louise "Babe" Danilevicius, and a hanai son, David Free. She is also survived by 16 grandchildren, 40 great grandchildren and 21 great, great grandchildren. Abby’s celebration of life will be held Sunday, November 8, 2015, at Kawaiaha`o Church, 957 Punchbowl Street, Honolulu. Public viewing will be from 4:30 p.m. with service at 6:00 p.m. Aloha attire is suggested. The interment service will be on Monday, November 9, 2015, 2:00 pm at Valley of the Temples Memorial Park. Interment Location: Cathedral View #1, Lot 153, A-2

ABIGAIL DUARTE NALUA`I Abigail &#8220;Abby&#8221; was born in Honolulu May 25, 1914. She entered Heaven&#8217;s gates on October 30, 2015. A consummate mother and homemaker, Abby enjoyed preparing meals for their family of eight. That number... View Obituary & Service Information

The family of Abigail Daurte Nalua'i created this Life Tributes page to make it easy to share your memories.

ABIGAIL DUARTE NALUA`I
Abigail “Abby” was born in Honolulu May...