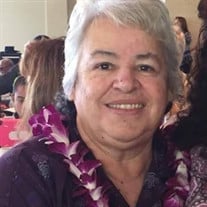 Celebrating the life of Bernadette Priscilla Horde 71, of Ewa Beach. Bernadette was born on June 4, 1946 in Honolulu, HI to Peter Kalani, and Bertha DeLuze. She is the third eldest of eight children. She attended Lincoln Elementary School, Stevenson Middle School and McKinley High School. After graduating Bernadette had a fun and exciting career in different professions such as Tahitian Lanai, Bureau of Conveyance State of HI, Diamond Parking, Quail Lodge (California), Hawaii Kai Golf Course, and Long Drugs Store. She retired in 2009 after serving for 3 years at Quail Lodge as an Assistant Manager. Bernadette was also very fortunate to have experienced living in different places. Of course where she settle in Ewa Beach, she also lived in Waimanalo, Puerto Rico, California, Pearl City, Kaneohe, Moanalua, and Kalihi. Bernadette married the love of her life Gilbert “Butch” C. Horde on August 14, 1971 at St. Anthony’s Catholic Church in Kalihi. She was influenced by 3 of her best friends; Eileen Pacheco, Ellen Haia and Shirley who share so much of their lives together from childhood thru each others adult life. She also influenced many by being so humble, generous and loving to ALL which she shared by being a part of the Koolau Bobby Sox, Kailua Adult Sports Association and Pali Breakfast Club. The most important events to her was the arrival of all her grandchildren, who she absolutely adored. Megann Sala, Taylor Gray (Michael), Caitlin Sala, Tyler Faulkner, Shelby-Lynn Bueno, Darrell Bueno, Micah Sala, Connor Sala, Tanner Faulkner, Carly-Rose Hayama, Kamaile Hayama. Great-Grandchild; Michael James K Gray. She had a few favorite hobbies which included playing Bingo, playing cards and bowling. Her favorite song was “Blue Darling”, boy did she love that song. Her ultimate travel destination choice was the city of Las Vegas, Nevada. Funeral services are scheduled for Wednesday, April 4, 2018 at Valley Of The Temples. Visitation 9:30am; Service 10:00am. Burial 12 noon at Valley Of The Temples Memorial Park.

Celebrating the life of Bernadette Priscilla Horde 71, of Ewa Beach. Bernadette was born on June 4, 1946 in Honolulu, HI to Peter Kalani, and Bertha DeLuze. She is the third eldest of eight children. She attended Lincoln Elementary School, Stevenson... View Obituary & Service Information

The family of Bernadette Priscilla Horde created this Life Tributes page to make it easy to share your memories.

Celebrating the life of Bernadette Priscilla Horde 71, of Ewa...