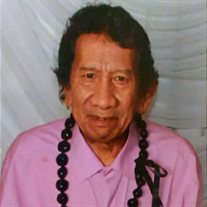 Mr Cesar Dela Cruz was born on April 17, 1956 in San Jose, Nueva Ecija, Philippines. He was the third oldest son of Emigdio Dela Cruz and Florentina Dela Cruz. He had two older brothers and 4 younger sisters. He was 16 years old when he migrated to Honolulu to join his parents and siblings who went to Hawaii before him. He graduated from junior high school at Kalakaua Intermediate and attended Farrington High School. Cesar met the love of his life, Valerie Sawyer, when they both attended day classes at the Care Hawaii Facility. They started as friends drinking coffee and smoked cigarettes together. Even at some time their illness kept them worlds apart they remained as trusted spiritual companions for life to the end. Cesar was a hard worker as a cook for a catamaran cruise ship until the company folded. He continued to work for the State of Hawaii school system at Waipahu High School as an after school cleaning staff until the family sold the Pearl City home and went to live with one of his younger sister, Divina Palacol, in Sacramento, California. He lived in Sacramento for seven years until he was diagnosed with terminal lung cancer last year. It was his dream to come back home to Hawaii and live out the remainder of his life, just sitting out int he warm sun, drink his coffee, smoke a pack of Kool cigarettes and eat the islands ahi poki. Before Cesar could fly home to fulfill his wish, God had other plans and gave Cesar his wings to go to a better paradise. Cesar's other wish to rest in peace near his dad and brothers did come true. He is now home in Hawaii. He was preceded in death by his dad, Emigdio Dela Cruz, and two older brothers, Bert and Ben Dela Cruz. Survivors include his 82 year old mother, Florentina Dela Cruz, younger siblings Divina Palacol, Emma and Robert Villamor, Faye Dela Cruz, Evangelyn Choksi and Vikas Choksi. He was a dearly beloved son, brother, companion, uncle, cousin, and friend. Interment Location: Patriotism #4, Lot 235, B-1

Mr Cesar Dela Cruz was born on April 17, 1956 in San Jose, Nueva Ecija, Philippines. He was the third oldest son of Emigdio Dela Cruz and Florentina Dela Cruz. He had two older brothers and 4 younger sisters. He was 16 years old when he migrated... View Obituary & Service Information

The family of Cesar Dela Cruz created this Life Tributes page to make it easy to share your memories.