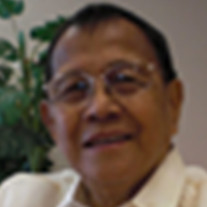 Celebrating the Life of Crisostomo “Cris” Raquiz Quiambao, age 82, of Honolulu, Hawaii who passed away on Friday, December 6, 2013. Cris was born on August 19, 1931 in Santo Tomas, Pampanga, Philippines to Marcos Quiambao and Herminia Raquiz. He was the 6th of 12 children. He attended Far Eastern University. He began a career as a Photographer. He retired in California as a Caregiver after serving 14 years of service. After retirement he was involved at the Co-Cathedral of St. Theresa in Honolulu, Hawaii. He lived in Quezon City, Philippines, Los Angeles, California and lastly in Honolulu. He was married to Albina Libatique (now deceased) on 12/28/1967 in Quezon City, Philippines and then remarried to Felisa Gamilong Antalan on 1/15/2005 in Honolulu, Hawaii. He was a member of Focolare Movement, Legion of Mary, Prison Ministry, Filipino Catholic Club, St. Kevin Church, Co-Cathedral of St. Theresa and which he served as a Eucharistic Minister. Some of his favorite religious sayings were “Jesus Forsaken” and “That all men be one. Cris was ALWAYS the Peacemaker and all who knew him knew this. His most important events in his life were his marriages, daughter’s graduation, Photography and Cooking. Crisostomo is survived by wife, Felisa “Fely” Antalan Quiambao; and daughter, Carla Quiambao. Some of his special friends were: Reverend Leo Steinbock, Dominic Diaso, Tessie Anno, Anita Ayag, Genalin Flores, Michael & Brenda Bonsato, James & Jocelyn Bush, Roger & Anna Domingcil, Annie Root, Andy & Louie Mariano, Alan Pacquing, Alfred Guerrero, Leonard & Gregoria Bulda, Dorothy & Andy Icarangal, Deacon & Mrs. Fernando Ona, Tessie Canilao, Venny & Jessica Villapando, Hennie & Menchu Lopezbanos, Ely Atanacio, and Willie Caoili. His services will be held on Thursday, December 19, 2013 at the Co-Cathedral of St. Theresa. Visitation will be from 9:30-10:15 a.m., family service at 10:30 a.m., Mass at 11:00 a.m., with burial to follow at 1:00 p.m. at Valley of The Temples Memorial Park. Burial information: Chapel Hill #6, 593, B-4

The family of Crisostomo R. Quiambao created this Life Tributes page to make it easy to share your memories.