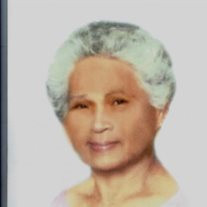 Elisa and her twin sister Flora was born on May 2, 1925. The 10th child of her Mother Alipia Viti Natividad and the fifth child for her father Damaso Ibara Yago. Her early childhood was spent in their hometown of Hawi on the big island of Hawaii.... View Obituary & Service Information

The family of Elisa Yago Sarte created this Life Tributes page to make it easy to share your memories.