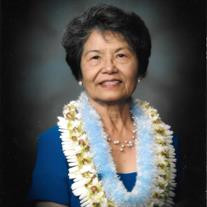 Filomena "Mena" Gumayagay Parubrub, 82, was called to heaven on August 6, 2017. She was born on March 11, 1935 in Brgy #17, San Nicolas, Ilocos Norte, Philippines. She was the third of nine children born to Placido and Eufemia Gumayagay. In 1954, 19 year old Mena was introduced to her future husband from Baay, Batac, Ilocos Norte, Sergio Hernando Parubrub. A month later, they were married. In 1960 husband Sergio brought Mena and 1st child Ailyn to permanently settle down in tranquil Kahalu’u. As the first of her siblings to become a US Citizen, Mena successfully petitioned for her mother, seven siblings, husband’s siblings and their families to immigrate to Hawaii from the Philippines. Mena and Sergio enjoyed 39 years of love and marriage. Mena and Sergio were blessed with four wonderful children, daughter Ailyn, and sons Max, Walter and Edwin. Mena enjoyed a career with Outrigger hotels in Waikiki, and later with General Services Administration at the US Federal Courthouse in Honolulu. She started when the Courthouse was first built, and retired 24 years later in 1997. Mena was thorough, efficient, and took pride in her work, which garnered her many achievement awards and distinctions throughout her career. Mena and Sergio loved traveling and ship cruises, enabling them to visit the world’s major cities and historic sites. Mena was passionate about growing plants and trees, usually waking up before the sun and spending hours maintaining her beautiful gardens. Her family and friends say she had cool hands because everything she planted gave back an abundance of fruits, vegetables and flowers. Mena lived the spirit of God by helping others, being a great daughter, wife, mother, and grandmother. Family was priority in Mena’s life and she always took the opportunity to be generous with her time and talents with everyone. As the family matriarch, Mena enjoyed hosting parties, and holidays, which brought family and friends together. Mena is preceded in death by husband Sergio, and survived by daughter Ailyn (Timothy) Lum, sons Max (Maria), Walter (Elizabeth), and Edwin Parubrub. Grandchildren Edson, Erik (Jessica), Evan (Shannon), Christopher, Adam, Mitchell, Daniel (Meghan), Marissa, Emmit, and Lauren. Great grandchildren Jaylee, Kaya, K’syn and Darwin. Siblings Anacleto (Magdalena), Cirilo (Francisca), Agapito (Betcheda), Dalmacio (Delia) Gumayagay and Carmelita (Paul) Oshiro. Predeceased in death by brothers Ernesto, Juan (Natividad), and Tiburcio (Rosita). Visitation 5:30 - 9:00 p.m., Friday, October 6, 2017 Hawaiian Memorial Park Mortuary in Kaneohe; celebration of life service to begin at 6:30 p.m. Additional visitation 8:30 - 10:00 a.m. on Saturday, October 7, 2017 at St. Ann's Catholic Church in Kaneohe; family service to begin at 10:30 a.m. with Mass to follow at 10:45 a.m. and burial to follow at Valley of the Temples Memorial Park 12:00 p.m.

Filomena "Mena" Gumayagay Parubrub, 82, was called to heaven on August 6, 2017. She was born on March 11, 1935 in Brgy #17, San Nicolas, Ilocos Norte, Philippines. She was the third of nine children born to Placido and Eufemia Gumayagay. In... View Obituary & Service Information

The family of Filomena Gumayagay Parubrub created this Life Tributes page to make it easy to share your memories.