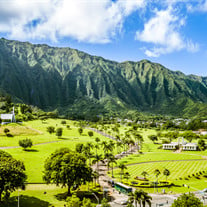 Celebrating the life of Gwendolyn “Gwen” Kwai Pung Kaanapu, 79, of Honolulu, Hawaii passed away on February 7, 2019. Gwendolyn was born to Marilyn Mew Chan (Lee) and Henry Amoy on November 15, 1939 in Honolulu, Territory of Hawaii. Gwen went from elementary school, then attended and graduated from Kaimuki High School, Class of 1958. Gwen worked part-time during the Summer for Dole Cannery; she worked in the trimmer, packer and empty can department. When she was “of age,” she went to apply for a better, full-time job elsewhere. Gwen was a retired shipping and receiving clerk for Anderson News (originally named Magazine Warehouse, then to Hawaii Magazine). She was hired temporarily, then stayed ‘til she got hired full-time. Gwen worked at the magazine warehouse in the book department – shipping and receiving; her job duties entailed shipping “hard back” books and book covers to the publisher, online recording the destination of deliveries to the stores, then scanned and recorded the ones returned to the store. Gwen retired in 2005 at age 65 from Hawaii Magazine; where she worked for over 42 years, from 1962 to 2005. She was the only one in the family who didn’t drive, and her transportation was the bus. She did all her shopping, go to the doctor and pick up her pills on the bus. She liked where she lived; it was convenient for her to go wherever she wanted and then go home. On special occasions, she has lunch at the end of each month; where there is a potluck and activities for the Senior Citizens to do. Gwen also spent her weekends with her sister and her family in Kaneohe; her sister would pick her up every Friday. Gwen is survived by her children, Kathleen “Kat” Kaanapu (Alan Yamashiro), Noelani Kaanapu Mori, John Kaanapu IV, Willard (Maria) Kaanapu, William Kaanapu; son-in-law, Scott Fong (husband of deceased daughter, Ululani Fong); eight grandchildren; two great-grandchildren; siblings, Edmund (Lilah) Amoy, Jeanette Fernandez, Blossom Jensen, Carolyn Over Holtzer, Audrey Amoy, Amy (Milton) Naula, Calvin Amoy, Henry (Gayle) Amoy Jr.; numerous nieces and nephews. Celebration of life and evening service for Gwen will be held on Tuesday, March 12, 2019 at Valley of the Temples Mortuary Chapel (Makai); visitation from 6:30 – 9:00 p.m., with service to begin at 7:00 p.m. Additional visitation and funeral service for Gwen will be held on Wednesday, March 13, 2019 also at the Valley of the Temples Makai Chapel; with visitation from 10:30 – 11:30 a.m., service to begin at 11:30 a.m., and burial to follow 1:00 p.m. at Valley of the Temples Memorial Park. Arrangements by: Hawaiian Memorial Park Mortuary

The family of Gwendolyn “Gwen” Kwai Pung Kaanapu created this Life Tributes page to make it easy to share your memories.