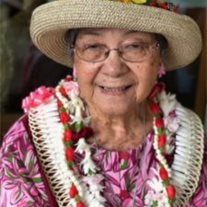 Irene Pereza Kalani Rubin of Kailua, Oahu, passed away on Sunday, September 2, 2018. She was born on the beautiful island of Maui in Kuiaha on April 10, 1929, to her wonderful parents, Ella Pak (Chong) and Santiago Pereza. Of her nine other siblings, Irene was the 5th oldest child of the family. Irene was born and raised in Kuiaha, Maui and then moved to the Island of Oahu and lived in Kailua, Hawaii. Irene began her career as a waitress at Ching Lee Chop Suey and later worked at Stuart’s Pharmacy, before becoming a homemaker. Irene’s first husband was Joseph Kalani, whom she married on July 23, 1949 at Sacred Hearts Church. She later remarried Alfred Rubin on June 28, 1958 at St. Theresa’s Church. Irene was a very loving, caring woman who was involved in organizations such as Young Ladies Institute at St. Anthony’s Church in Kailua and other charitable events. In her free time she enjoyed doing things such as crossword puzzles, word finds, reading, crocheting, sakura cards, bowling and especially cooking; which she was great at. She also enjoyed the wonderful sounds of Christian and Hawaiian music; it was very peaceful and relaxing for her. Irene was a special woman and was very thankful to have had members of the YLI, Hanai Ohana, Sua’s, Loa’s, Dilliners, Lemasa’s, Reyes-Antoque’s to be a part of her life as each and everyone of them has made an impact on her life. The most important events in her life was when she earned her high school G.E.D from McKinley High School in 1982 at the age of 53 and also becoming a cancer survivor twice. Irene truly believed in the saying, “When someone is down, you help to pick them up.” Irene is survived by her children, Jocelyn (Calvin) Pitts, Joseph R. Kalani, Jana (Dal) Alesna, Joni (Randal) Lee, Russell (Shawna) Penna, Juanita (Bill) Pendergrass; 16 grandchildren; 22 great-grandchildren; and four brothers. “She was clothed with strength and dignity.” Proverb 31-25 Celebration of life services for Irene will be held on Thursday, October 4, 2018 at St. Anthony’s Catholic Church in Kailua; visitation from 10:00 – 11:00 a.m.; Mass to begin at 11:00 a.m., lunch at 12:00 p.m., with burial to follow 2:00 p.m. at Valley of The Temples Memorial Park.

Irene Pereza Kalani Rubin of Kailua, Oahu, passed away on Sunday, September 2, 2018. She was born on the beautiful island of Maui in Kuiaha on April 10, 1929, to her wonderful parents, Ella Pak (Chong) and Santiago Pereza. Of her nine other... View Obituary & Service Information

The family of Irene P Rubin created this Life Tributes page to make it easy to share your memories.