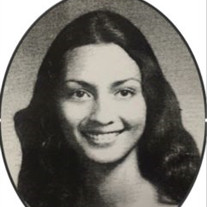 Joanna Lynn Stallard-Peard&#8217;s soul continued on its journey, April 1, 2019, departing from Queens Medical Center in Honolulu at 8:46pm. Joanna is from Honolulu, Oahu and a part of the &#8216;Makekau Ohana&#8217;. Her soul was born into... View Obituary & Service Information

The family of Joanna Lynn Stallard-Peard created this Life Tributes page to make it easy to share your memories.