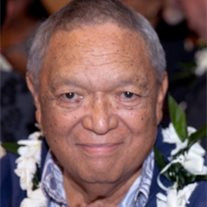 John Pua’ala Kaniaupio was born on October 29, 1937 to John Manumanu and Miu Lang (Wong). John was raised in Maunawili, O’ahu, attended Kailua Elementary School and graduated from The Kamehameha School for Boys in 1955. He joined the Air Force then married his high school sweetheart Tiny Tavares in 1957. He worked as an Air Traffic Controller for the FAA and later retired as a Project Manager for Diebold. He was a parishioner at St. Ann Catholic Church in Kaneohe for 45 years, serving as the Tech Supervisor along with numerous other volunteer ministries until he passed away peacefully on May 5, 2019 at Castle Hospital, surrounded by his family. John is survived by his wife of 61 years Tiny (Tavares), his sister Myra (Matsumoto), his children Danette (Ken), Jared (Shelly), Lei (Chris) and Dawn. His grandchildren, Sean, Chase, Shanelle (Zachary), Johnny, Shane, Maya, Noah, Joshua K, Joshua S, his 3 great-grandchildren, Mahtai, Kamalei and Kaohi, his many caregivers over the last year, and his faithful 4-legged sharpei companion Liko. Services will be held at St. Ann Catholic Church on Tuesday, May 28. Visitation 930am-11:00am, Celebration of Life 11am-11:45am, 11:45 Mass; 1pm Burial at Valley of the Temples.

John Pua&#8217;ala Kaniaupio was born on October 29, 1937 to John Manumanu and Miu Lang (Wong). John was raised in Maunawili, O&#8217;ahu, attended Kailua Elementary School and graduated from The Kamehameha School for Boys in 1955. He joined... View Obituary & Service Information

The family of John Kaniaupio created this Life Tributes page to make it easy to share your memories.