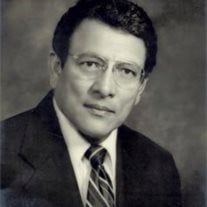 John Sweeney San Diego Sr. entered into rest October 6, 2017 at home in Phoenix, Arizona surrounded by family. Born on November 24, 1932 in Honolulu, Hawaii. John is survived by his wife Leslie, 3 sons, John Jr (Cecilia)-Phoenix, AZ, Derek, Honolulu, HI and Scott (Holly)-Chandler, AZ 8 grandchildren, Jason (Christina) Kanoa , Andrew USCG and Jordan San Diego , Mitsuko (Harrison) Crum, Bruce Kimura, Heather (Nathan) Whitmer, Eric (Clara) San Diego and Michael San Diego, 3 Great Grandchildren, Bryce( Andrew), Eliana (Jason), Cecilia Rose (Mitsuko). Brother Koko Kanaloa, Sisters Connie Furtado and Doreen San Diego all live in Hawaii. John was preceded in death by his parents, brother Anthony and sister Carmella. From 1953 he served in the Army and was awarded a National Defense Service Medal before serving as a reservist until 1961.He attended the University of Hawaii graduating with a Bachelors degree in Business Administration. John began his 25-year career in law enforcement with the Honolulu Police Department in 1956 and rose the ranks to become Assistant Chief of Police before being selected as Police Chief for the county of Maui. John retired from the Maui County Police Department after serving five years as Police Chief. John was institutional for many proud accomplishments during his leadership from 1976-1981.Most noteworthy was the implementation of the “9-1-1” one step Emergency telephone system for all Maui residents. After returning to Oahu, John was the state director for Budget Rent a Car until his full retirement. In 1992 John and his wife Leslie moved to Arizona to be closer to the grandchildren and settled in Tempe, AZ. He enjoyed many days on the greens golfing in sunny AZ. John and Leslie were devoted and active members of the Church of Jesus Christ of Latter Day Saints. Married for 60 years, John lovingly cared for Leslie until he no longer was able to. John bravely battled Lymphoma, kidney disease, diabetes, dementia and Alzheimer’s. He received his treatment at the renowned Mayo Clinic in Scottsdale. In 2015, no longer able to be independent, John and Leslie moved in with John Jr and wife, Cece to be cared for daily at their home until his passing on October 6. Services will be held beginning at 9:30 AM on Sunday October 29th at Hawaiian Memorial Park Mortuary. Burial and blessings will follow service at Valley of the Temples Cemetery. Memorial Services in Arizona will be held in Tempe, Arizona on Saturday, November 11, 2017.

The family of John S San Diego, Sr. created this Life Tributes page to make it easy to share your memories.