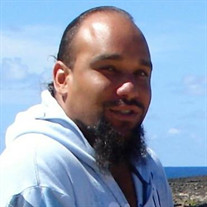 Jonathan “Jon” “Scooby” David Fontes of Kahalu’u and Kaaawa, was born July 5, 1982 in San Diego, California and moved to Hawaii at a very young age with his parents Billy and Lori Gomes. He attended Kahalu’u Elementary School, Samuel Wilder King Intermediate and graduated from J.B. Castle High School in 2000. Continuing his education, Jon attended Honolulu Community College, majoring in automotive mechanics and body repair, and was also a cook at several restaurants. As a child, he met his growth milestones early, walking and talking at 10 months of age. He enjoyed hanging out with his friends, especially Karlina, Ali’i, Noah, Paulino, Beaux, Sheena, Pili and Sasha. Being athletic, his favorite past times were MMA (mixed martial arts), baseball, football and riding motorcycle. His favorite music was reggae and rap. He enjoyed attending major sports events, and considered his graduation as one of the most important events in his life. He was smart, and excelled at almost everything he did. His family describes him as energetic athletic, kind, happy-go-lucky and very loving. Jonathan passed away on December 16, 2016 in Kaneohe at the age of 34. He will be missed and forever loved and remembered. He is survived by his parents, Lori and William “Billy” Gomes; sister, Melissa (Pasa) Tulua; grandparents, Miriam Dias Foltz and Diane Gomes; uncles, Jack (Michelle) Foltz, Michael (Denise) Freitas and Ernest Ferreira; aunts, Linda (Kevin) Minard, Pat Crawford, Barbara Tamashiro and Dawn (Dana) Kalima; nieces, Angelina, Zionna; nephews, Jahziah, Zahfiyah and Pasa “P.J.” Jr.; many other aunts, uncles and cousins. Jonathan was preceded in death by his brother Gary. A Celebration of Life will be held on Saturday, January 28, 2017, at St. Ann Catholic Church, 46-129 Haiku Road, Kaneohe, Hawaii 96744. Visitation will be from 9:00-10:15 a.m. followed by a Eulogy at 10:15 a.m. Mass will be celebrated at 10:30 a.m. with burial to follow at 11:30 a.m. at Valley of the Temples Memorial Park. A reception will be held at 12 noon in the cemetery office lanai. Interment Location: Holy Cross #2/1, Lot 191, C-1

The family of Jonathan David Fontes created this Life Tributes page to make it easy to share your memories.