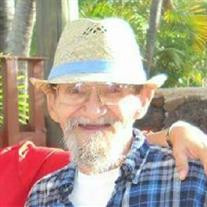 Manuel “Manny” Maldonado Jr., 82, of Honolulu, Hawaii passed away on Wednesday, February 10, 2016 at his residence. He was the eldest of five children born to Manuel Maldonado and Theresa Kaili Maemae on August 23, 1933 in Palama, Honolulu, Hawaii. He was a retired roofer for Maldos Roofers which is private family owned business. He attended Farrington High School where he earned his high school diploma. After graduation he began his career as a dispatcher with a few companies such as Pacific Concrete Company, Loan Star Construction, and Hawaiian Cement Company. Later he ventured to join into the family business known today as Maldos Roofers. He resided in Honolulu for most of his life and was married to Lily M. Maldonado. He had a passion for playing horsehoes and was very involved with the sport. He also enjoyed the family business of roofing, golfing, drinking and socializing with family and friends, and traveling to LasVegas for Jack Pot. The music he enjoyed listening and dancing to were Cachi Cachi and Puerto Rican. He is survived by son, Manuel K. Maldonado; daughters, Ipo Ramos, April Maldonado, Jo-Ann Shimoda, Carmelita Maldonado and Lisa Frank; step-sons, James Apo and Everett Kini; brothers, Eddie Maldonado and Lawrence Maldonado; 18 grandchildren; 30 great-grandchildren and nine great, great-grandchildren. Visitation 9:30 – 10:30 a.m. on Saturday, March 19, 2016 at Valley of the Temples Chapel; service to begin at 10:30 a.m., with a burial to follow 1:00 p.m. at Valley of the Temples Memorial Park. Manny will be remembered as a gentleman, kind, and loving, proud, and giving person. His loving wife Lily died 16 years ago (February 10, 2000) on the day that he passed. Now they will be joined together for eternity. Rest in Love until we see you again. Interment Location: Cathedral View #1, Lot 124, D-2

Manuel &#8220;Manny&#8221; Maldonado Jr., 82, of Honolulu, Hawaii passed away on Wednesday, February 10, 2016 at his residence. He was the eldest of five children born to Manuel Maldonado and Theresa Kaili Maemae on August 23, 1933 in Palama,... View Obituary & Service Information

The family of Manuel "Manny" Maldonado, Jr. created this Life Tributes page to make it easy to share your memories.