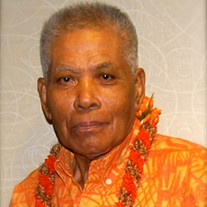 Paulino O. Castillo August 12, 1925 – February 23, 2014 Born in Balaoan, La Union, Philippines in 1925, Paulino Ocasion Castillo, a Sakada at the young age of 21 in 1946, was imported to O’ahu by the Hawaiian Sugar Planters’ Association to work as a laborer. After 13 years, he left Hawaiian Sugar for a better opportunity with Reed and Martin where he found himself overseas on a tiny island named Kwajalein. There he met Euspicio Refuerzo, uncle of Enriqueta Rapacon, who masterminded their union, which lasted 52 golden years. Returning to Honolulu after two years overseas, he continued with Reed and Martin where he worked as a construction laborer on landmarks such as the State Capitol building and the Marco Polo. He became a carpenter for Dynamic Corporation and later with Pacific Construction, building apartments and condominiums in the Salt Lake neighborhood and adding to downtown Honolulu’s increasing skyline. In 1980, he joined Hawaiian Dredging Construction Company until 1991 when he retired and hung up his tool belt. Soon after, Paulino found a new career, full time caregiver, working alongside Enriqueta in her care home business. He was a proficient hard-working substitute, caring for the elderly residents. To balance the demands of caregiving, he danced, and he cultivated his garden. Paulino and Enriqueta enrolled at Arthur Murray studios learning new dance steps and meeting new friends. Weekends were spent on the dance floor waltzing and cha-cha-cha-ing the night away. Paulino spent numerous hours in his garden tending and nurturing his vegetables and fruit trees. Families and friends, far and near, reaped the bountiful fruits of his labor. A strong family man, Paulino enjoyed the challenges and delights of raising three daughters: Annabelle, Angela and Agnes. In 1989, he graciously and unconditionally welcomed Agustin and Jocelyn as his own. And when his daughters married, ‘Dabid’, ‘Roojah’ and ‘Eeddee’ were accepted into the family. On December 25, 1999, Paulino was gifted a precious little bundle of joy, his first and only granddaughter, Nicole. Six grandsons followed – Joshua, Noah, Jacob, Derrick, Brian and Tristan. “Papa Lino” cherished their visits to Hawai’i. He took delight in spending quality time, creating memories and establishing bonds of friendship with each grandchild. A man with a humble heart and gentle soul, Paulino quietly closed his eyes and went to sleep February 23, 2014, when God gently embraced him and called his name. Paulino is survived by his wife, Enriqueta Castillo; daughters, Annabelle Castillo, Angela (Roger) Partolan, Agnes (David) Johnson, and Jocelyn (Eduardo) Munoz; son, Agustin Castillo; sisters residing in the Philippines, Avelina Tabin, Maria Ortiz and Feliciana Ranchez; and seven grandchildren. The funeral service will take place on Saturday, March 29, 2014,11:00am at St. Theresa Cathedral; Interment @ 1:00 pm at the Valley of the Temples Memorial Park. Burial Information: Chapel Hill # 8, Lot 696, A -1

The family of Paulino O. Castillo created this Life Tributes page to make it easy to share your memories.