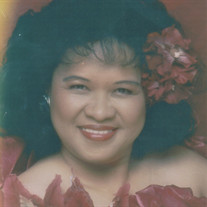 Remy Marlang Walter, 66, of Diamondhead, Mississippi passed away December 2, 2016 at St Joseph Hospice, Gulfport, Mississippi. Remy was born August 30, 1950 in San Felipe, Sur, Binalonan, Pangasinan, Philippines. She was a graduate of Earn Vocational School, Manila Philippines, Far East University, Manila Philippines. She moved to Hawaii in 1979 and became a U S citizen in August 1995. While working at Sam's Club in Pearl City, she met her future husband, James Walter, and they were married in April 2005. The last few years she was in and out of hospitals battling several different diseases that took a toll on her body. The doctors tried to put her in hospice card in December 2014. She refused. She lived for two more years. Remy died on December 2, 2016, with her son Marvin and husband James at her side. She will be greatly missed by all her loved ones. She is preceded in death by father, Emilio Marlang, Sr.; sister, Letty Abuel; brothers, Ruben and Oscar. She is survived by husband, James Walter; daughters, Marion Manaois and Mariaelena Abamonga; sons, Mario Manaois Jr. and Marvin Manois; grandchildren, Mara Alontaga, B J Manaois, Gerald Manaois, Keilen Abamonga, and Keira Abamonga; mother, Elena Marlang; sisters, Josephine, Lourdes, and Aurora; brothers, Emilio Jr., Romeo, Jimmy, Jesus, Robert, and Francis. Memorial service will be on Saturday, January 21, 2017 at St Theresa Catholic Church, 712 N School Street, Honolulu, Hawaii 96817 from 9:30 to 11:30 am. Burial to follow at Valley of the Temples at 12 pm. Memorial Contributions may be made to James Walter (husband). Casual Attire.

The family of Remy Marlang Walter created this Life Tributes page to make it easy to share your memories.