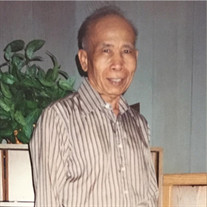 Valiente Miguel Bumanglag, age 88, died last March 3 at Oahu Care Facility shortly after being diagnosed with stage four cancer. He is survived by wife, Liela, with a son, Valiente Jr. and six children: Marilyn, Edward, Dante, Flordeliz, Robert and Rosemary, from ex-wife Feliza. He also leaves behind thirteen grandchildren, Joy, Michael, Mark, Michelle, Christine, Leah, John, Ven, Dan, Maria, Karen, Kyle, and Mikayla and four great grandchildren Jayden, Yxzanea, Zamic, and Prince. He served in the Philippine Military, American Legion of Ilocos Norte for ten years. He is a veteran of the Korean War. He grew up in San Nicolas, Ilocos Norte and moved to Hawaii in 1990. As a father, he is a hard worker. He strongly believes that hard work is the key to success. He is very honest and straightforward. He stands by his word no matter what. Wake service will be held on Monday, March 13, 5:30 PM at Borthwick Mortuary, Maunakea Chapel. Final viewing and funeral mass will be held on Tuesday, March 14, 10:00 AM at Co-Cathedral of St. Theresa and on 1:00 PM he will be interred at Valley of the Temples in Kaneohe.

The family of Valiente Miguel Bumanglag created this Life Tributes page to make it easy to share your memories.