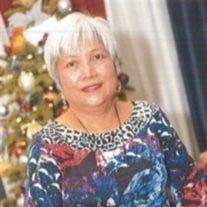 Celebrating the Life of Virginia Coleta D. Felix, born March 6, 1951 in Brgy. 8, San Nicolas, Ilocos Norte, Philippines. Her parents were Trinidad and Jacinta Damo. She was the 2nd oldest of 6 children. She attended Sannicolas Central Elementary, University of the East, Northwestern College and Santa Rosa Academy. She earned her following degrees Bachelors of Science in A.B Political Science. After graduation she began a career as an Inspector of Banana Plantation. She also worked as a Secretary in a Municipal Hall and an Accounting Clerk with James K. Michishima CPA accounting firm. A Member of OLPH and St. Joseph Catholic Church. Married to Antonino Feliz. Passed away on Wednesday October 2, 2013 in Ewa Beach, Hawaii. Her most important events in her life was seeing her daughters succeed and seeing her grandchildren grow. She was a very compassionate, smart, optimistic and loving person. Some special people in her live were Dana Smith, brothers and sisters. Some of her favorite hobbies were traveling, spending quality time with her family. Her favorite song was Paper Roses. She is survived by daughers, Vian (Zircon) Ramos, Karen (Joel) Rosales and Marianne (Dennis) Nilo; brothers, Felino (Ofelia) and Rosario (Regina) Damo; sisters, Teresita (Alberto) Cargo, Remedios (Rudy) Hufana and Leonora Nartatez; 4 grandchildren, Shanta, JR., Jake and D.J. ; Her services will be on Tuesday, October 22, 2013 at St. Anthony’s Catholic Church-Kalihi. Visitation will be from 5:30: -6:30p.m., service: 6:30p.m..; additional visitation will be held the following day at 10:30a.m.; Mass will begin at 11:30a.m. and burial to follow at 1:00p.m. at Valley of The Temples Memorial Park Burial Information: Serenity 2 - 60 - D -4

The family of Viriginia Damo Felix created this Life Tributes page to make it easy to share your memories.