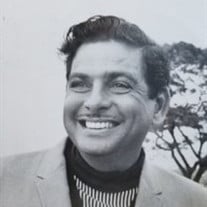 Willy L. Peahi passed away on Tuesday, June 5, 2018, at the age of 85, at Castle Hospital, Kailua, Oahu, Hawaii. He was born on July 16, 1932 in Honolulu to Frances Kahoiwai Panaewa and Frederic S. D’Orsey. He is survived by wife, Lily P. Peahi, daughter Lillian P. Nero of Kauai, sons, Peter N. (Karen) Napeahi, of Honolulu, James “Kimo” K. (Lehua) Napeahi of Kona, Willis P. (Loreen) Peahi of Waimanalo, and daughter-in-law, Vicky Peahi; sisters, Avis-June Alohalani Pang, and Laverna Joseph of Waianae. He is also survived by 22 grandchildren, 40 great grandchildren and 4 great-great grandchildren and numerous nieces, nephews and extended family members. Preceded in death by daughter Carolyn Hi’ilani (William Kalama) Rogers, son, Willard L. Peahi Jr., grandson, David ‘Kawika’ Napeahi and great grandson, Kiliwehionalani Reynon. He enlisted in the U.S. Army during the Korean War and received an Honorable Discharge. He was employed by Western Contract Furnishers as the Warehouse Manager. At Olomana Golf Links he worked his way up from the Marshall, to Golf Cart Manager to Golf Course Superintendent. He retired from Grace Pacific Construction as a Machine Engineer. Willy was a member of Hawaiian Men Golf Club on Oahu and Maui, and many other clubs. At one time he had a handicap of 2. After retiring he continued to golf 3 times a week. He would wake up before the chickens to get in line at Ala Wai Golf Course for a tee time. When he wasn’t golfing he was working in his yard and turned it into a paradise. He was a man who knew what he wanted and worked hard to get it. He will be missed.

The family of Willard “Willy” Lelikolehua Peahi created this Life Tributes page to make it easy to share your memories.