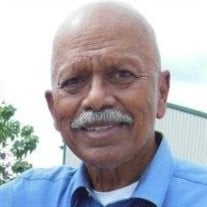 Frank Sreenivasam Samuel, 80, of Honolulu, Hawaii passed away on Sunday October 14, 2018. He was born November 28, 1937 in Sri Lanka to James and Malathi Samuel. After Frank finished high school, he sailed to Ireland to attend medical school. In 1967, he graduated from the Royal College of Surgeons in Dublin, Ireland with his Medical Doctor degree. Immediately after graduation, he left Ireland for Regina, Saskatchewan, Canada. He set up a private practice with two other physicians at Broadway Medical Clinic in Regina. While practicing medicine, he became one of the Team Physicians for the Saskatchewan Roughriders of the Canadian Football League. He also was an Olympic Team Physician for Team Canada to several Olympic games. Frank began to feel his need of having God in his life again. On his visits to Hawaii to visit Rodney and his family, he would go to Gospel Meetings. God began to soften his heart and he wanted to follow Jesus’. On one of these trips, Frank openly declared that he wanted become part of the family of God (March 1983). Frank took another step of obedience as he was baptized in Waimanalo, Hawaii (March 1985). Frank and Ruth loved having their ministers and friends in their home. In March 1984, he met Ruth on one of his trips to Honolulu to visit his childhood friend, Rodney. As they say, the rest is history. They became engaged in May and married in October of 1984. He moved to Hawaii with all of his possessions in a shipping container. Frank began a 4 year residency in Adult, Child and Adolescent Psychiatry at the John A Burns School of Medicine in Honolulu in 1985. Following his residency, he worked in Saipan as a Psychiatrist for the Saipan Medical Center. Between 1991 and 2007, Frank was employed by various agencies such as Ho’omau Ke Ola (substance abuse facility), Kahi Mohala, Hawaii State Hospital, Alaka’I Na Keiki, Child and Family Service and the Dept. of Education. He loved working with the children to help them cope with their challenges and situations. On June 12, 1997 a little baby boy was born in Maple Ridge, British Columbia, Canada. Frank and Ruth were privileged and honored to be chosen as his adoptive parents. Jonathan became the love of their lives up to today. Frank and Ruth were always happy as they provided a loving, stable and caring home for Jonathan. In February 2007, Frank underwent open heart surgery for a replacement aortic valve. His recovery was hampered by many complications. Frank retired when he realized he didn’t have the stamina for a full time job anymore. Frank’s health was steadily declining for several years when he entered into the St. Francis Hospice Program in September 2018.

Frank Sreenivasam Samuel, 80, of Honolulu, Hawaii passed away on Sunday October 14, 2018. He was born November 28, 1937 in Sri Lanka to James and Malathi Samuel. After Frank finished high school, he sailed to Ireland to attend medical school.... View Obituary & Service Information

The family of Frank Sreenivasam Samuel created this Life Tributes page to make it easy to share your memories.