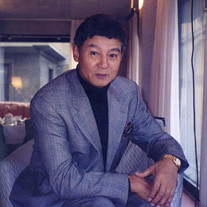 Nagao "Joe" Takimoto was born on August 26, 1933 in Yokohama, Japan to Frederick DaSilva and Kiyoko Takimoto. Joe's siblings include Rosina, Larry, Frederick Jr., and William DaSilva. Joe attended the St.Joseph's School with international students from around the world. There he discovered his talent and love of singing, and was active in the church chorus. During WWII, Joe was invited to sing for the Japanese Kamikaze soldiers who were being deployed for war. He often told this fascinating story and even appeared in a Japanese documentary, with a singing cameo of "Umi No Kukaba". During the 1950's and 60's in Japan, Joe became a famous singer with the stage name "Taki Joji". He appeared on radio, television, Nichigeki Theatre, Yokosuka Naval Base Officer's Club, and his own nightclub "Club Kei". He sang jazz standards with a powerful and enchanting voice. Joe was also a fashion model appearing on commercials for Mitsubishi, Santori Whisky, Kirin Beer, Minolta, Yanagiya Pomade, Mitsukoshi Department store, and on the runway as Mr. Japan for the International Woolmark Fashion Show. Joe retired in Honolulu, Hawaii when he fell in love with Claudette. They married and had a fairy-tale life together. Joe and Claudette traveled to Europe twice a year on buying trips for Claudette's Creations, Inc., a high-end European fashion boutique. In his spare time, Joe enjoyed golfing, cooking, and creating radio-controlled model airplanes from scratch. His planes are in personal collections and on display at the Hobbitat Hawaii and the Pacific Aviation Museum Pearl Harbor. Joe also continued to sing at local nightclubs in Honolulu over the years with Ron Miyashiro, Don Conover, and the loving community of singing friends built over decades. In 2012, Insides Music released a double disc album of his self-recorded jazz standards. Joe's legacy will live on in our hearts. He touched countless lives with his charm, fascinating stories, and singing. We will love him now and forever. Click on links below to see Joe: Recent Japanese Documentary (start at 34 min) https://youtu.be/L8_7lh0urgM Listen to Taki Joji "Standards" http://insidesmusic.com/insidesmusic/takijoji-standards.html Funeral service will be on Friday, October 9, 2015, 9:00am at Sacred Hearts (Punahou)., with a burial to follow, 12:00 p.m. at Valley of the Temples Memorial Park. Interment Location: Alii View #2, Lot 22, A-1

The family of Nagao Joseph Takimoto created this Life Tributes page to make it easy to share your memories.